Gairo Vecchio (Old Gairo)
Among the historical centres we should certainly mention the village of Gairo Vecchio, that nowadays has become a highly-concerned touristic attraction (because of the facts, that have transformed it in what it is today; see the historical section of the present document). This old centre, that has been uninhabited since 1963, is an important example of the archaeology, regarding the settlements of Central Eastern Sardinia. 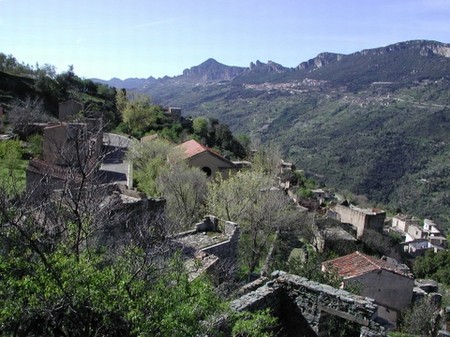 Gairo Vecchio (foto Virgilio Piras)
Gairo Vecchio is situated on the right side of Monte Trunconi, above the left bank of the Rio Pardu at the altitude of about 520 m above the sea level, and at the distance of just more than 2 km from the new town of Gairo Sant'Elena, that is located higher on the mountain.
When you enter the old village, you can immediately note the planning technique of the paths and streets: some of the streets were passable, in particularly, the main ones, and others served for pedestrians. The streets were mainly unpaved or cobbled, and the level difference between them, as the result of the location of the village on a mountainside, was resolved through the building the stairs, pedestrian- or bridle-paths. 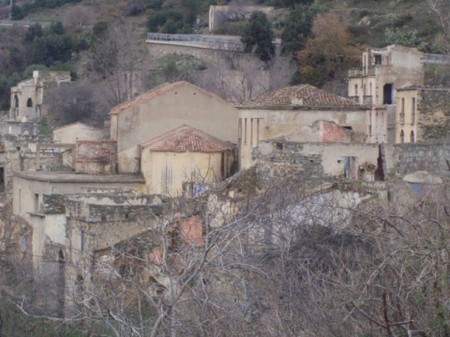 Gairo Vecchio (foto Roberto Deidda) The materials for paving and building the stairs, as well as the houses, are, in most cases, granite, schist and other local rocks, while as a binder mud or mortar of lime and sand were used, which are ancestral heritage of building techniques. The lime for making mortar in order to bind the constructions was produced in a lime kiln, created for these reasons in the locality of Taquisara, where the today's fraction of Gairo is located. This kiln remained active still after the middle of the twenty's century.
Recently, the central street of Vecchio Borgo (Old Village) has been asphalted, because of its importance as a route, connecting the village with the surrounding countryside.
It can be also noted, that unlike other towns there are no building types distinguished by different areas of the village of Gairo Vecchio, but every area may contain houses that differ between them very significantly: the vicar's house was near that of a peasant, or a sharecropper, or a trader, or a craftsman, or a landowner. So, the distinction between the gentlemen upper class and the poor lower class never took place here, that is probably the consequence of the fact, that people felt themselves as part of a single community, regardless their economic affluence.
As the town was situated on an impervious territory with an evident slope, the construction of houses often developed in two stores. They were usually built between two roads: one, higher on the mountain and another one, downstream the town. 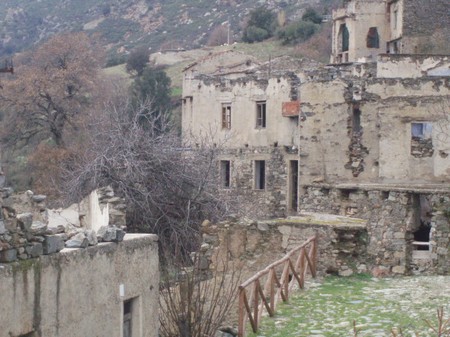 Gairo Vecchio (foto Roberto Deidda)
A typical house consisted of a kitchen (“sa cogina”), a bedroom (“sa domu de lettu”) and an attic (“s'istassu”). From the outside you entered directly to the kitchen, from which you went upstairs to the bedroom, from which, in turn, usually by an accommodation ladder you could reach an attic, that overlooked the bedroom. There was “s'errili” behind the attic, where the waters from the roof ran down and where people did their deed, as there were no today's water closets at the time. For those, who didn't have “s'errili”, there was a brook on the outskirts downstream the village. The attic had a very low roof, under which one could hardly stand, and there was a window there, that gave on the roof of the kitchen. The attic served as a girls' bedroom and as a larder. The kitchen was a “seat” of women's day work and the room where boys slept, as well as a pig, who stayed under an oven in the corner, and hens, that slept perched on that same oven, and a donkey, who at night was tethered to a millstone placed in the opposite to the oven corner. Sometimes a goat slept in the kitchen too, who gave milk for a family's breakfast. The boys slept on the floor mats in the centre of the room with their feet towards the fireplace, that in winter was burning continuously. There was no danger of gas intoxication, because gas and fume went out through the tiles of the roof, that often were not cemented, but put and pressed with big stones in order not to be brought away by wind. 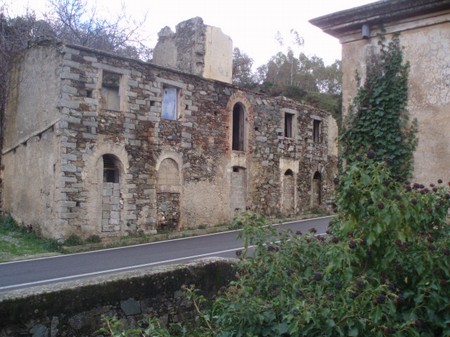 Gairo Vecchio (foto Roberto Deidda)
Sometimes “su sutta” was also built, i.e. another room under the ground level, that was also used as a larder or as a cellar.
Arches in the doors and the windows were more common than architraves. They were made of square stones or bricks plastered then with mortar of lime and sand. The whole structure was often decorated with iron arches. The inserted floors were often made of wooden beams posed over the supporting walls and of a planking as a pavement.